Deprecated: Function create_function() is deprecated in /home/anaspiri/public_html/wp-content/themes/vivienne.2.2/functions.php on line 305
 A much anticipated update on everyone's favorite cat | An Aspiring Heroine

This post may contain affiliate links, which means I may receive a small commission, at no cost to you, if you make a purchase through a link. Read the full privacy policy and disclosure here.

It occurred to me last weekend that if you all are anything like me, you’ve been missing your regular dose of Zoey, everyone’s favorite cat! (If you aren’t familiar with my adorable cat, you can read all about life from her perspective!) I honestly missed her a ton the week after the wedding and then toward the end of the honeymoon. There’s nothing like an animal’s love, you know? She, however, was at her grandparents’ house in Rome where she gets to go outside whenever she chooses and can explore an entire house instead of a one-bedroom apartment (read: she did not miss us).

In other Zoey news, we completely ruined her life by breaking down all the cardboard boxes from our wedding gifts and taking them to the recycling center. She had a pretty sweet cat playground there for a while, and I legitimately think she believes all of the boxes (and gifts) were sent for her own amusement. She still refuses to recognize that Spencer and I have made our little arrangement permanent. She might like me when I feed her, but not when I come between them. I believe she spent the entire winter break convincing herself that I’m going to load all of my belongings into a moving truck and vacate the premises at any moment. 🙂

This seems like the weirdest transition in the world, but bear with me. You know when a truck drives down the street, and it’s so loud that you wouldn’t be surprised it they were actually inside your house? (I know this sound particularly well thanks to my childhood babysitter’s boyfriend who was one of many super cool Southern dudes who had their truck mufflers removed.) That’s what it sounds like now whenever Zoey gets really happy. Or when she’s sleeping. Or after she eats a lot. I swear to you, it’s like she had her little kitty muffler removed and just didn’t tell us. She starts to purr, and I can’t help but laugh, it sounds so ridiculous. And now I’m really hoping she doesn’t actually have something wrong with her… If this is a serious red flag, will one of you please let me know?

And finally, her daily cardio exercises with (running away from?) my in-laws’ dog combined with having to share her food with two other cats have resulted in Zoey losing some extra poundage. All of our family members made fun of her winter coat when they were here for Thanksgiving, but now we have the final laugh! Of course, she stares me down disapprovingly when I feed her about half of what I used to, but she’ll get over it. I have no doubt she’ll thank me for it in a few years! 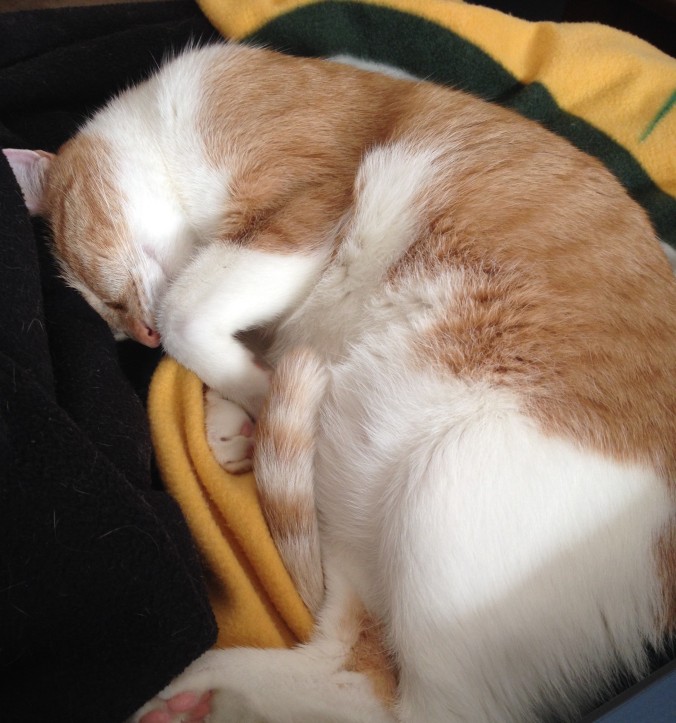 So, there you go! I know you’ve been waiting for it. Zoey will get a much needed break from our love this weekend when Spencer and I head to Indiana to spend a day on the ski slopes, so you can expect a post all about our trip in the near future.

Oh, and Zoey wanted me to remind you all to check out my classics book club, which starts in just under two weeks! She personally wishes we were reading Alice’s Adventures in Wonderland (Dinah happens to be her idol). Maybe next year, Zo!

What’s In a Name? The Story Behind An Aspiring Heroine

Welcome to An Aspiring Heroine — a place for millennial women to find affordable, sustainable, real-life solutions to all of life's plot points. I'm Tyler, and I believe we're all heroines worthy of our bookshelves!

Deprecated: genesis_footer_creds_text is deprecated since version 3.1.0! Use genesis_pre_get_option_footer_text instead. This filter is no longer supported. You can now modify your footer text using the Theme Settings. in /home/anaspiri/public_html/wp-includes/functions.php on line 5234

We use cookies to ensure that we give you the best experience on our website. If you continue to use this site we will assume that you are happy with it.OkNoLearn more
You can revoke your consent any time using the Revoke consent button.Revoke Cookies